Brief description of the organisation

According to its association statutes the intended purpose of the registered society "Schulpartnerschaft mit Mosambik e.V." lies in the development of pedagogic aims and environmental politics in connection with the building up and cooperative support of Mozambican schools and the advancement of international spirit und international understanding.

Corresponding to the history of the school partnership the association is closely linked to Gesamtschule Hungen, it does not commit to political or religious doctrines.
The association and Gesamtschule Hungen mainly help children in Mozambique to obtain their right to an elementary education by financing the construction of school buildings in various parts of Mozambique. The first autonomously carried out school project was the construction of Escola Primaria Completa de Bengo Uli Seibert near Gondola (cornerstone ceremony 1992).
Since 2001 we have been cooperating with BMZ. The last three projects (the construction of school buildings of primary schools at Nhamacoa Rica and Chibuto II and the extension and renovation of the secondary school at Gondola) could successfully be realised with the help of "ALTERNAID - Foundation for people who got into difficulties ".

The continuous activities in Gondola district / Mancia Province led to good networking relations with the governments of the district and the province. Additionally we cooperate closely with the Ministry of Education in Maputo, especially with Nelessia Cossa. In the Ministry she is in charge of foreign NGOs which operate in the field of education. She assists us with the planning and implementation of project related travels and meetings.

Regarding the implementation of construction work we closely collaborate with Jorge Filipe. He is a Mozambican construction specialist who lives in the region and was trained in Germany. He speaks excellent German and has been responsible for school building projects in Gondola district for a long time.

One of the main principles of our activity is to accompany the schools built with our support by keeping the partnerships active. We also managed to win other schools in Germany for these partnerships e.g. Theodor-Heuss-Schule in Baunatal.

For Gesamtschule Hungen and its pupils the relationship to Mozambique, the support and exchange in form of journeys to Mozambique which take place every year, mean an important sustainable pedagogic development.

By improving the education situation in some communities in Mozambique with new school buildings and pedagogical support for every school young people receive access to education for the first time or get the opportunity to graduate.

We think that education is the most efficient means to reach developmental goals since it is the basis for an autonomous progress of the people in the partner country.

After 500 years of colonialism Mozambique obtained her independence from Portugal in 1975. At this time only 5% of the inhabitants were able to read and write. Thirty years later, according to the UN the rate of illiteracy in Mozambique dropped to 40%. Today more than 60% of the population are able to read and write owing to the great effort of the government and a great number of aid organisations which are involved in the development of Mozambique.
Several schools in Germany maintaining a partnership with schools in Mozambique have played a decisive role in the development. These school partnerships were initiated by Padre Vicente Berenguer, a Spanish priest who devoted most of his life to Mozambique. 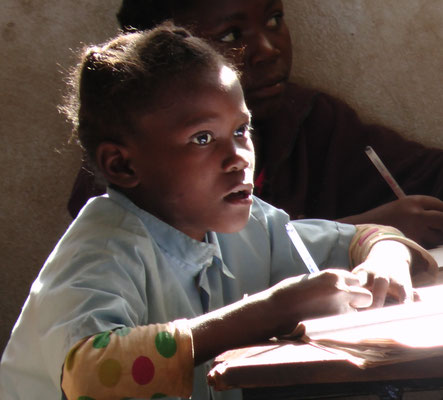 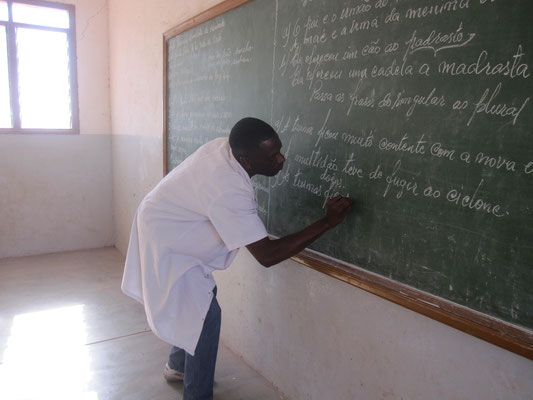 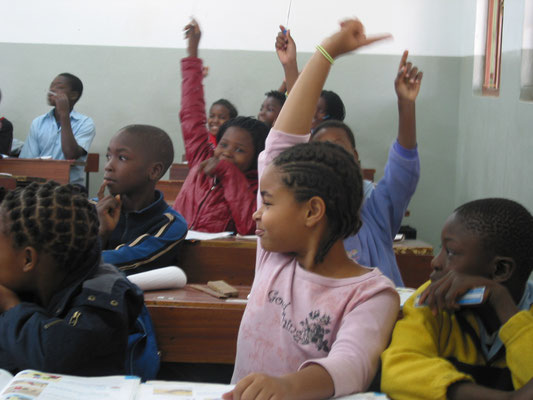 Thus thousands of children in Mozambique received a comprehensive basic education and some of them obtained a chance  to visit a secondary school.

Since 1980 Gesamtschule Hungen has taken a chance to establish school partnerships with schools in Mozambique. It has become an important part of its educational work. Several schools at different places have received financial and educational support:

The involvement of a number of generations of pupils, teachers, and the generous people of Hungen and the surrounding villages  has born fruit. All these people involved are proud of this success. 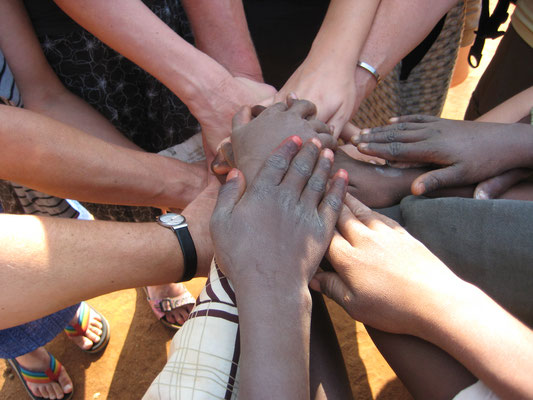 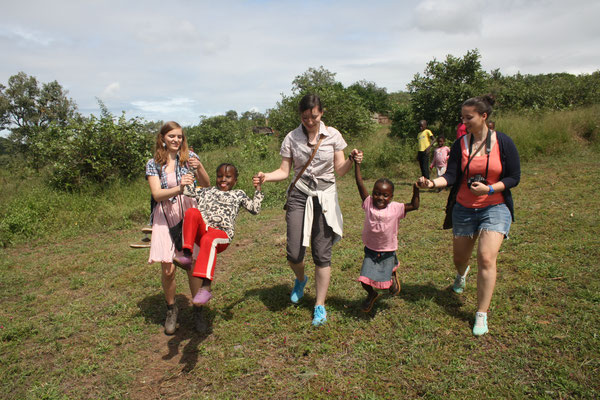 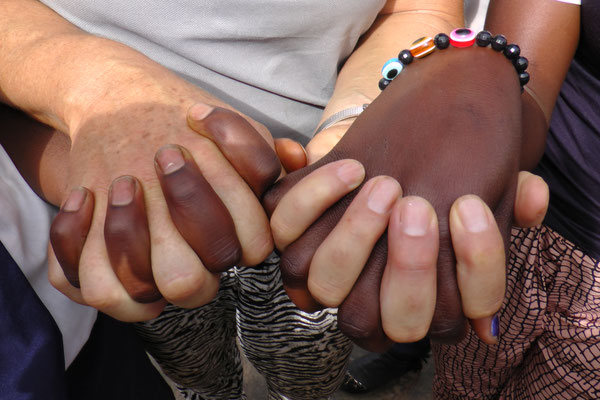 Since 2002 Gesamtschule Hungen and its non profit association Verein Schulpartnerschaft mit Mosambik e.V. has been supported financially by BMZ, the German Ministry of Economic Co-operation and Development. As a start this contribution enabled us to expand Escola  (EPC) de Bengo Uli Seibert to an exemplary  school centre. It is situated in Bengo, a suburb  of Gondola in the Province of Manica. It was named after an unforgettable former head girl of Gesamtschule Hungen, Ulrike Seibert. Shortly before she wanted to start a gap year to do voluntary work at the partner school in Mozambique, she was killed in an accident in Juli 1991. The cornerstone laying ceremony of the first two classrooms took place in April 1992. The deputy head girl Bettina Träger and Walter Exler, one of the deputy headmasters who was in charge of the school partnership with Mozambique  attended the ceremony.

After the school had been extended to a school with 8 classrooms, a teachers' room, multifunctional sports ground,  a snack bar, WCs, a 40m deep well and electricity for all classrooms  the government started to make the school to a secondary school in 2016. This enables the pupils to continue classes up to the 10th grade. 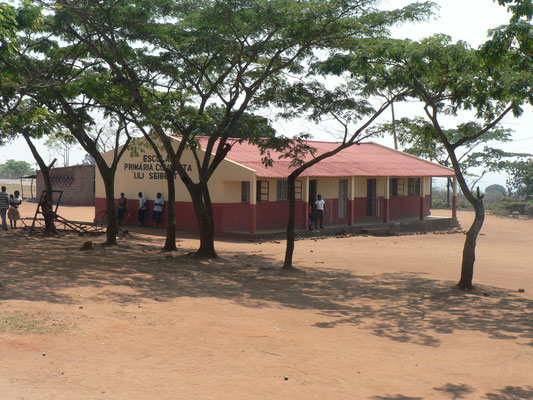 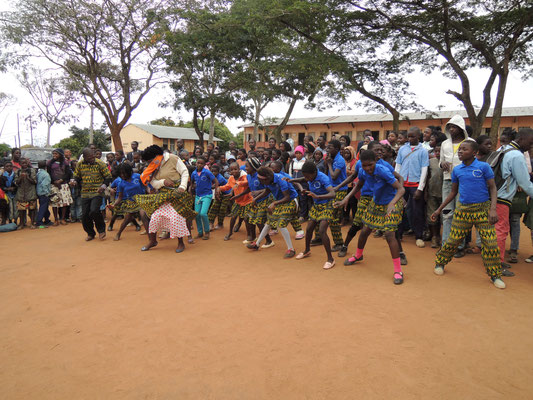 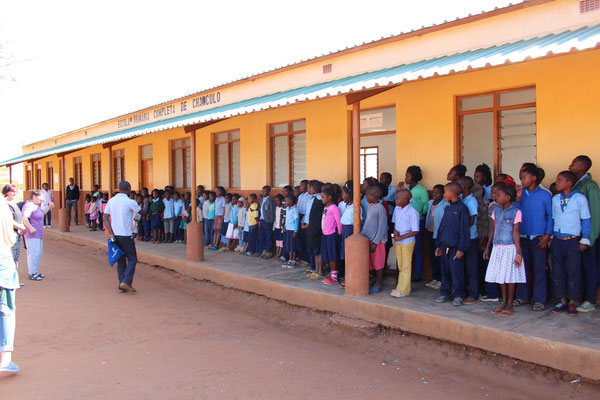 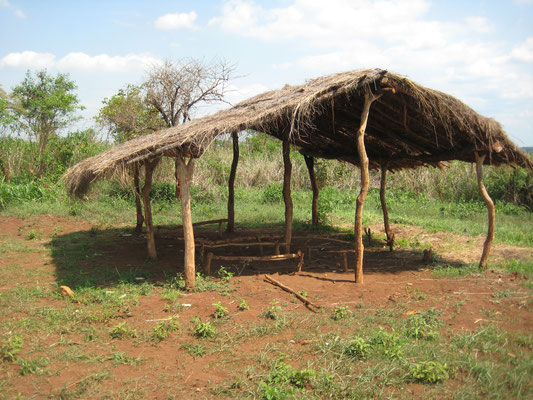 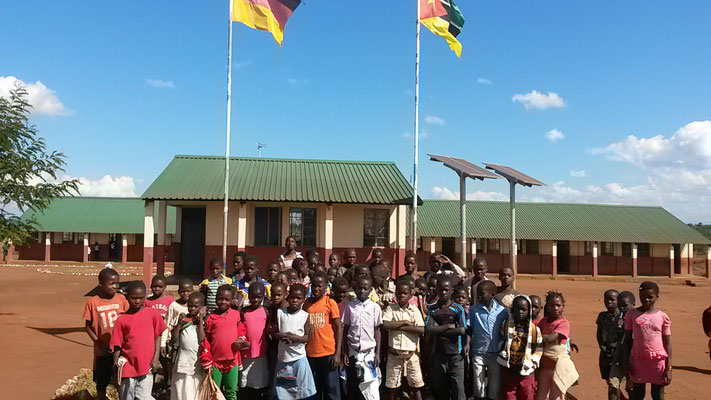 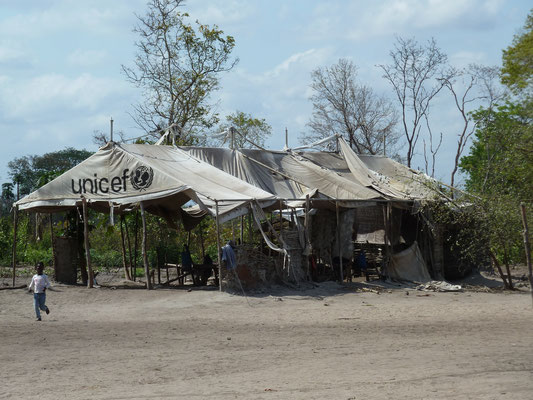 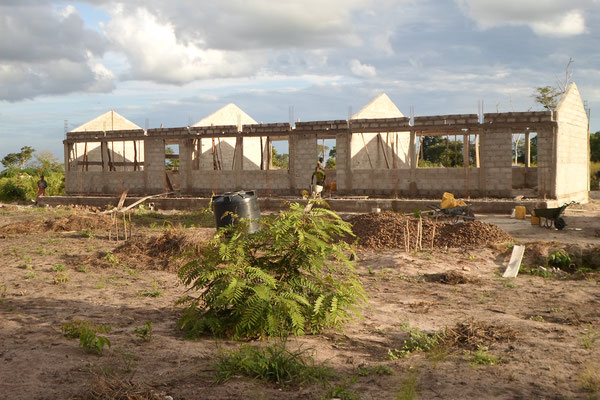 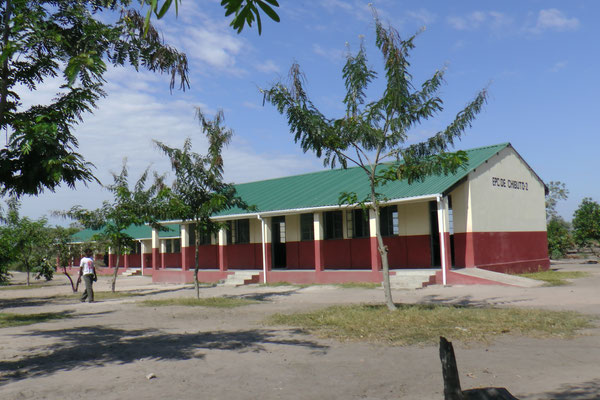 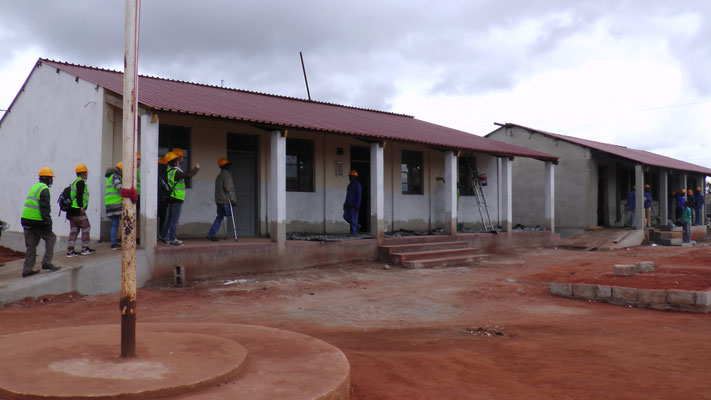 The relationship to EPC Uli Seibert exceeds just material aid. Pen friendships between pupils in Germany and pupils in Mozambique whose mother tongue is Portuguese, joint workshops for teachers in Germany and Mozambique and mutual visits are part of a real school partnership.

The involvement for new school buildings in Mozambique has recently been intensified especially through the financial support from "ALTERNAID - Stiftung für Menschen in Not".

After the construction of a primary school in Chanculo near the N'Komati River, 35  km from Ressano Garcia, the emphasis has now been laid on constructions of schools in the Gondola district.
In 2011 EPC Nhamacoa Rica was built near Macate comprising 5 classrooms, an office, some small houses for teachers and a well. A provisionary  school in Chibuto II was replaced by neat new school buildings in 2014, where 650 pupils can now attend school in two shifts.

2018 we celebrated the inauguration of the extension of the Secondary School Geral Josina Machel in Gondola.  By the end of 2017 eleven classrooms for classes eight to ten with 1600 pupils were renovated and five new classrooms for chemistry, physics, and computer science as well as a library, an office, and sanitary facilities had been added. These subject specific classrooms are mandatory for founding a secondary school in Mozambique.

agriculture, computer science, carpenters and building craft in the District of  Macate.

Gesamtschule Hungen and its non-profit association "Verein Schulpartnerschaft Mosambik e. V." are looking forward to attracting new members. Children and teenagers are free of charge. Adults are kindly asked to pay a voluntary fee of  12€ annually, so the extremely low administrative costs can be covered. All donations are exclusively used for the benefit of children in Mozambique.